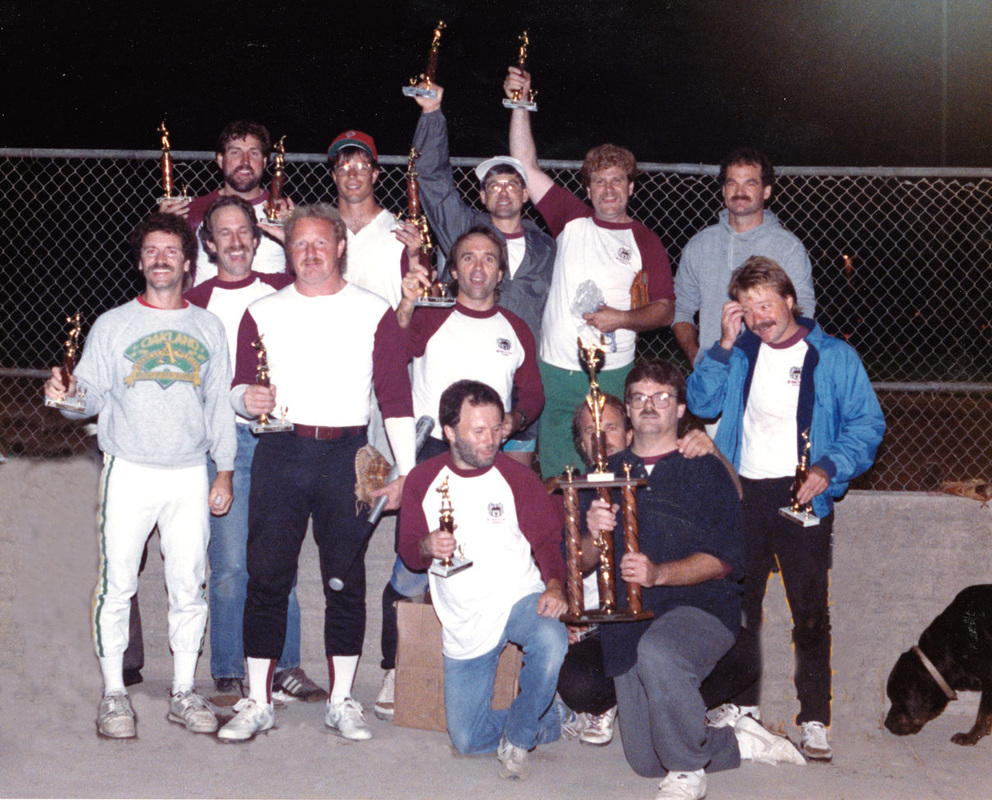 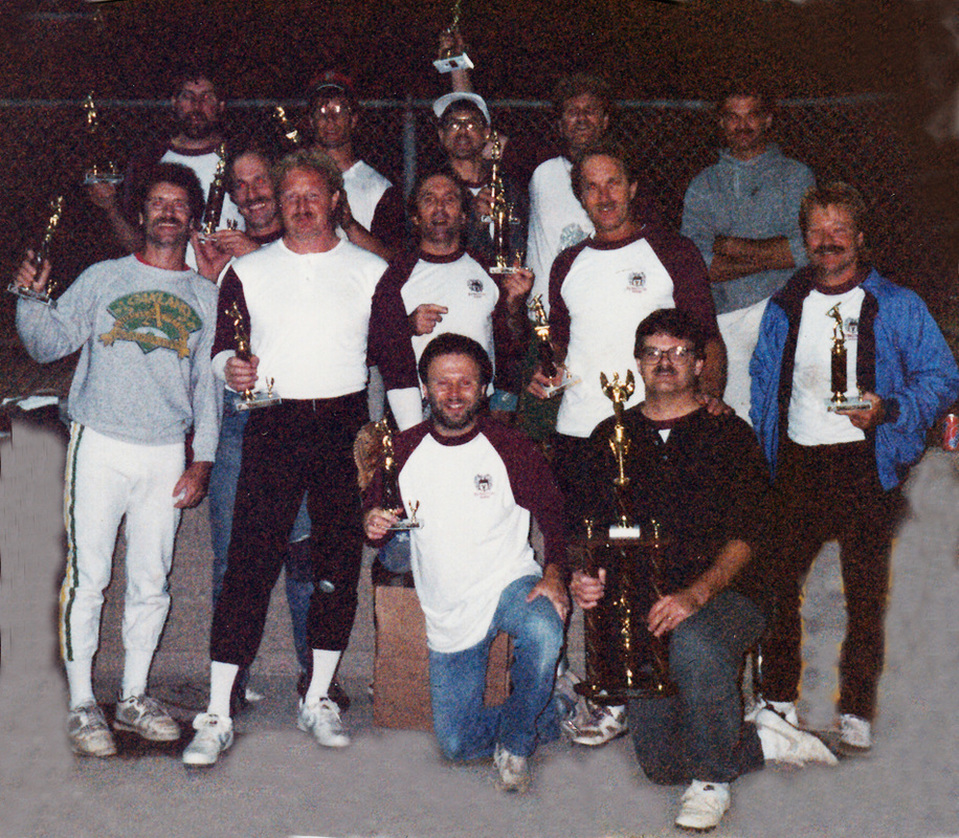 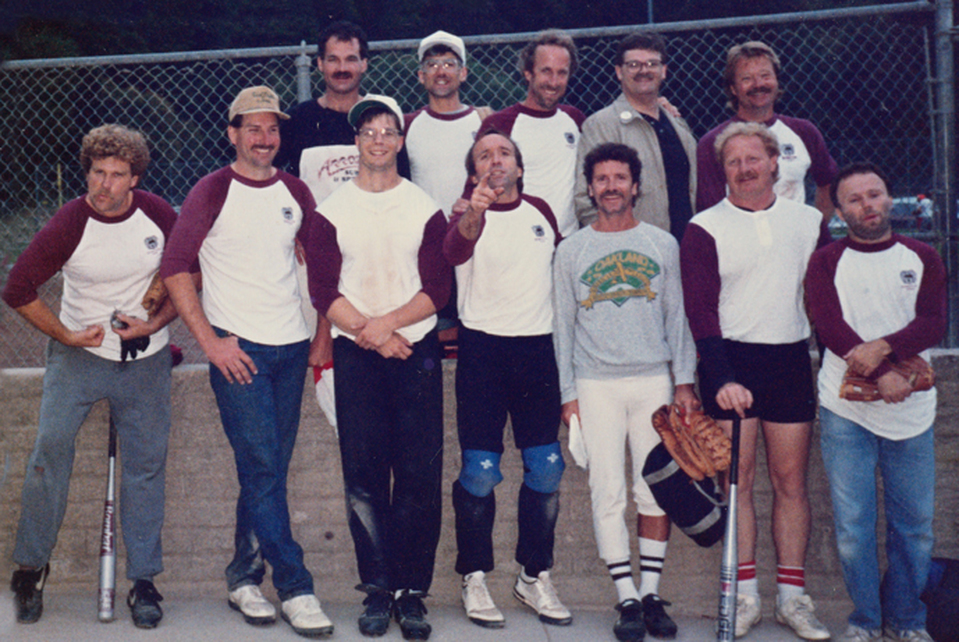 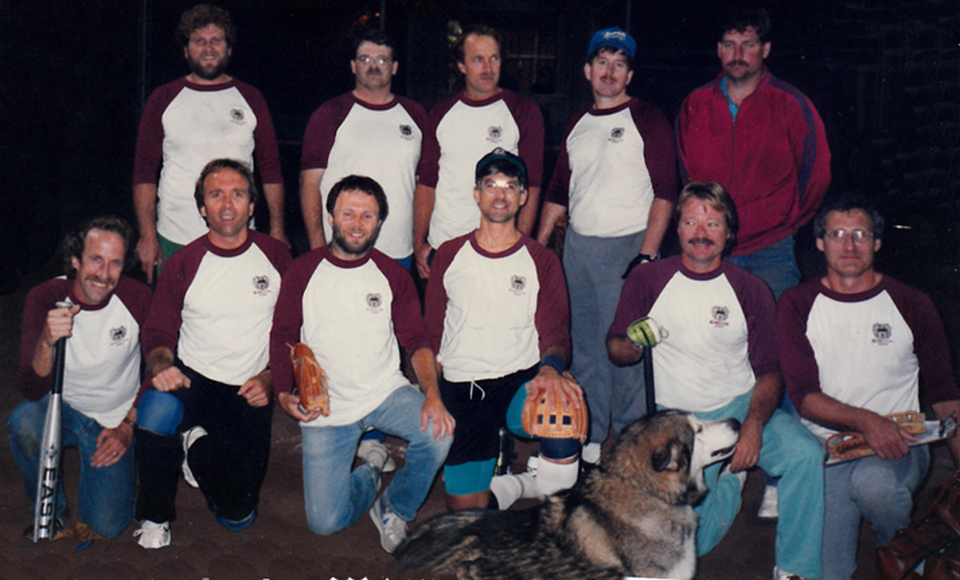 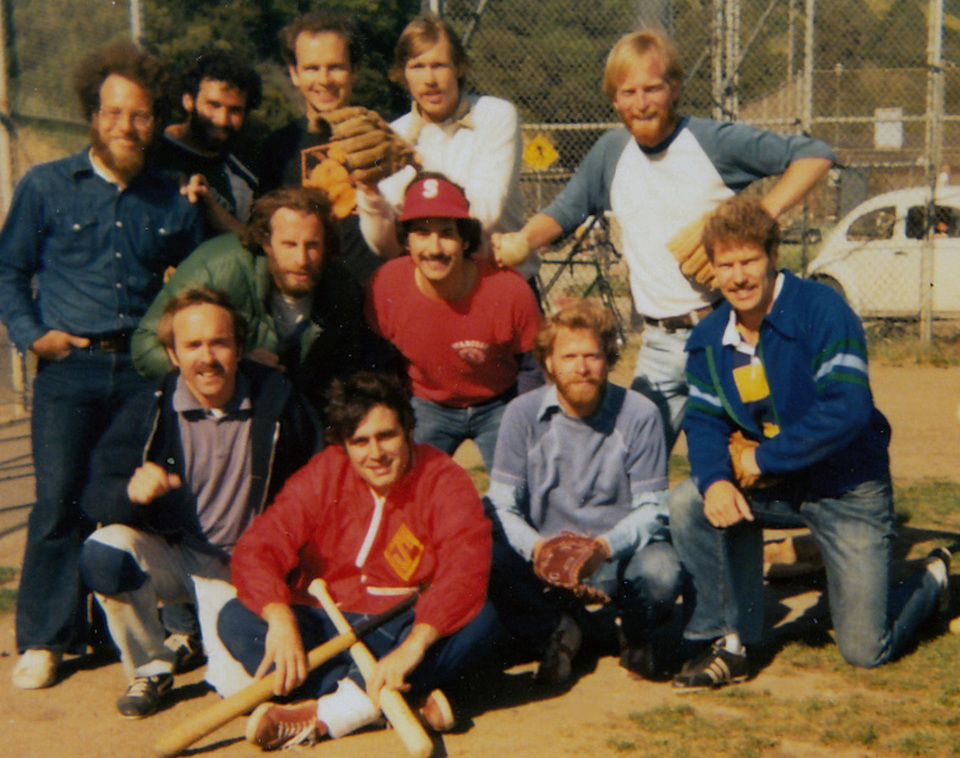 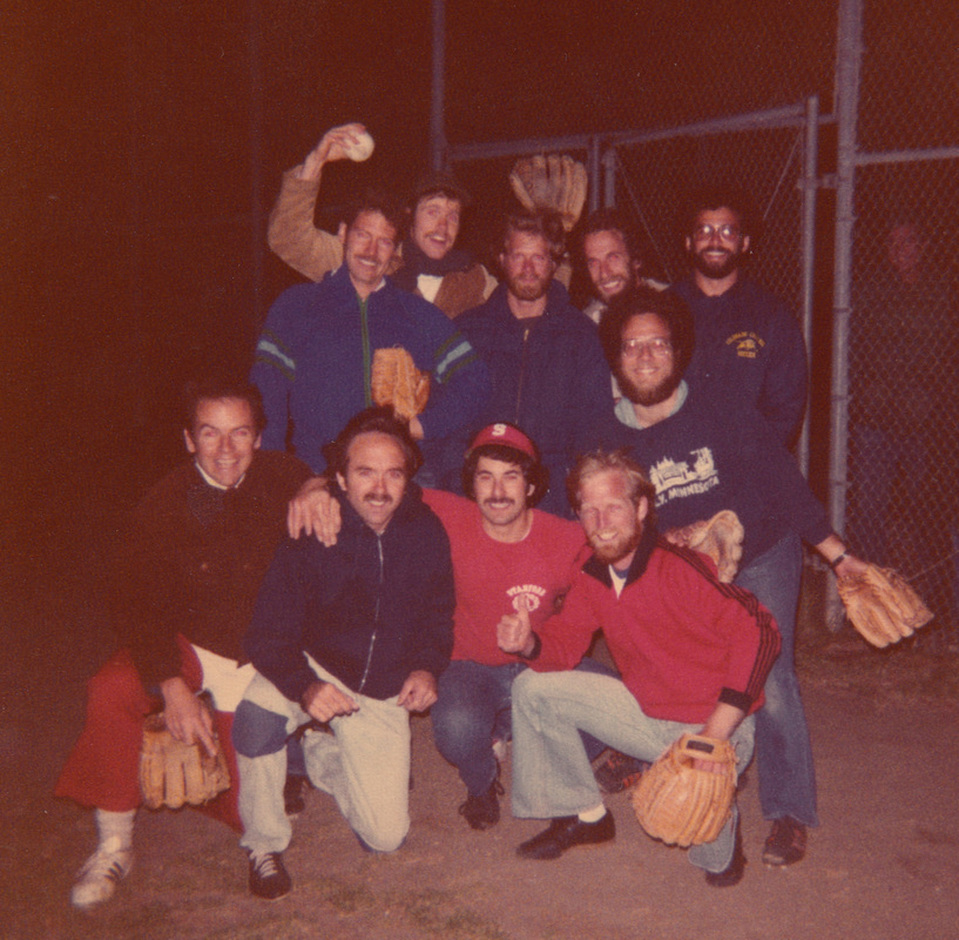 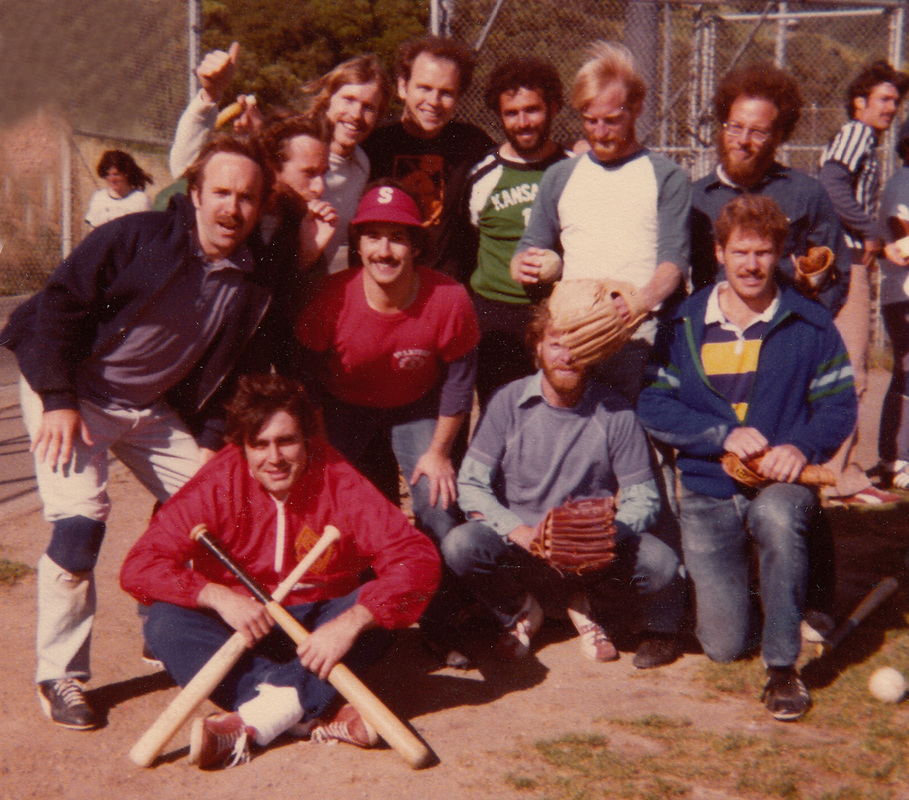 Front Row (L to R): John Mangini (With Bats); Ken Hart (Partially obstructed by baseball glove); Tom Metz (On one knee) ​
Back Row Standing (L to R): Derek Morris, Jim Burns, Alan Herren, Jaime Davega, George Converse, Larry Weisgal, Dan Smith, Tim Jackson
UC BERKELEY INTRAMURALS - 1974
FAST-PITCH SOFTBALL TEAM
THE SWEET STROKERS! - (The Originals!)
FINISHED 3RD IN LEAGUE OF 64 TEAMS,
LOST IN SEMI'S TO 1st PLACE WINNER
(We are still searching for a 1974 team photo of our team, "The Sweet Strokers - The Originals!" In 1974 we finished 3rd in the 64-team UC Berkeley intramural fast-pitch league, losing in the semi-finals to the eventual league champion, SAE.
Our "Sweet Strokers" fast-pitch softball team, behind the pitching of "Ace" George Converse, made the semi-finals of the UC Berkeley Intramural Fast-Pitch Softball championships in 1974. We lost in the semi-finals to the eventual winner, the fraternity SAE #2 (they had so much talent available within their frat and other frat connections that SAE had two separate teams!)

There were 64 fast-pitch teams in eight leagues to start and the top two teams in each league entered the single-elimination playoffs. After beating two other teams, we lost 4-2 in the semi-finals to the SAE team, which then went on to win the finals by a blow-out score of something like 10-2. So I like to think that we effectively came in a close 2nd in the leage of 64 teams since we did better against the winner than the team they beat in the finals! Not bad! Historical revisionism? Perhaps!

In this particular Daily Cal article below (which is a little disjointed as the editor says - The Daily Cal did not devote too many reporters to cover the huge men's softball intramurals program), our team The Sweet Strokers won in the first round by beating Toad Hall. In the next round (not covered by the Daily Cal) we beat Captain T and His Merry Men to get into the semi- finals where we were then one of four teams left of the original sixty-four. And then we lost in the semi-finals to the eventual fast-pitch champion SAE #2 by a score of 4-2. SAE#2 went on to win the finals 10-2. (I don't recall seeing any other earlier or follow-up fast-pitch softball articles in the huge Daily Cal newspaper - again budget constraints or just the fact that intramurals was a lower priority of the Daily Californian, which is understandable.)

Four of the players from the 1978 Sweet Strokers teams pictured above (which we sort of re-formed in 1977-78 when I was in grad school) were on the original 1974 team - John Mangini, George Converse, Alan Herren and Derek Morris. That quarter in 1974, George at the time was not currently registered at Cal though he attended the prior quarter; but we sneaked him in anyway. Hell, he had been registered one quarter ago and was just taking a break from school so it was close enough! But as we feared might happen, at the beginning of the SAE semi-finals game (which we lost anyway!) SAE filed a protest at the beginning of the game with the ump claiming that George was not a currently registered student and was therefore an "illegal" player. We denied it at the beginning of the game and we had George play anyway, with the appeal hanging over our heads in case we did win. Those frat boys had really done their research on every player on our team and each player's registration status!

And those frat boys were correct! George was "illegal." So regardless, we would have forfeited that semi-finals game as a result of our technically "illegal" player George Converse. Those frat boys were that serious about their softball! But I can't blame them. It was a seriously competitive league and we had technically broken the rules. Still I imagine probably half the teams in the 64-team fast pitch program had a player or two who were non-current students. Itt only became a potential issue if a team got high enough into the final playoff levels and if a team went through the efforts to investigatge. We were aware earlier in the season that this might come up but never thought we would get that far during that season anyway! Of course, frats were always at an advantage in terms of their softball talent pool because they simply had a lot of people to choose from both internally and externally through their "frat boy network" at the campus. Many frats seemed to even made recruiting intramural athletes their main mission and that was a big part of their focus - that plus keggers and meeting sorority girls. Plus they probably had an ongoing SAE research task force checking the registration status of players on opposing teams - such was the depth of personnel available to some frats. They were serious. But SAE #2 really was indeed the best team with a lot of talent and deserved to win the title.

We are still looking for a photo of the 1974 Sweet Strokers team, if one exists! 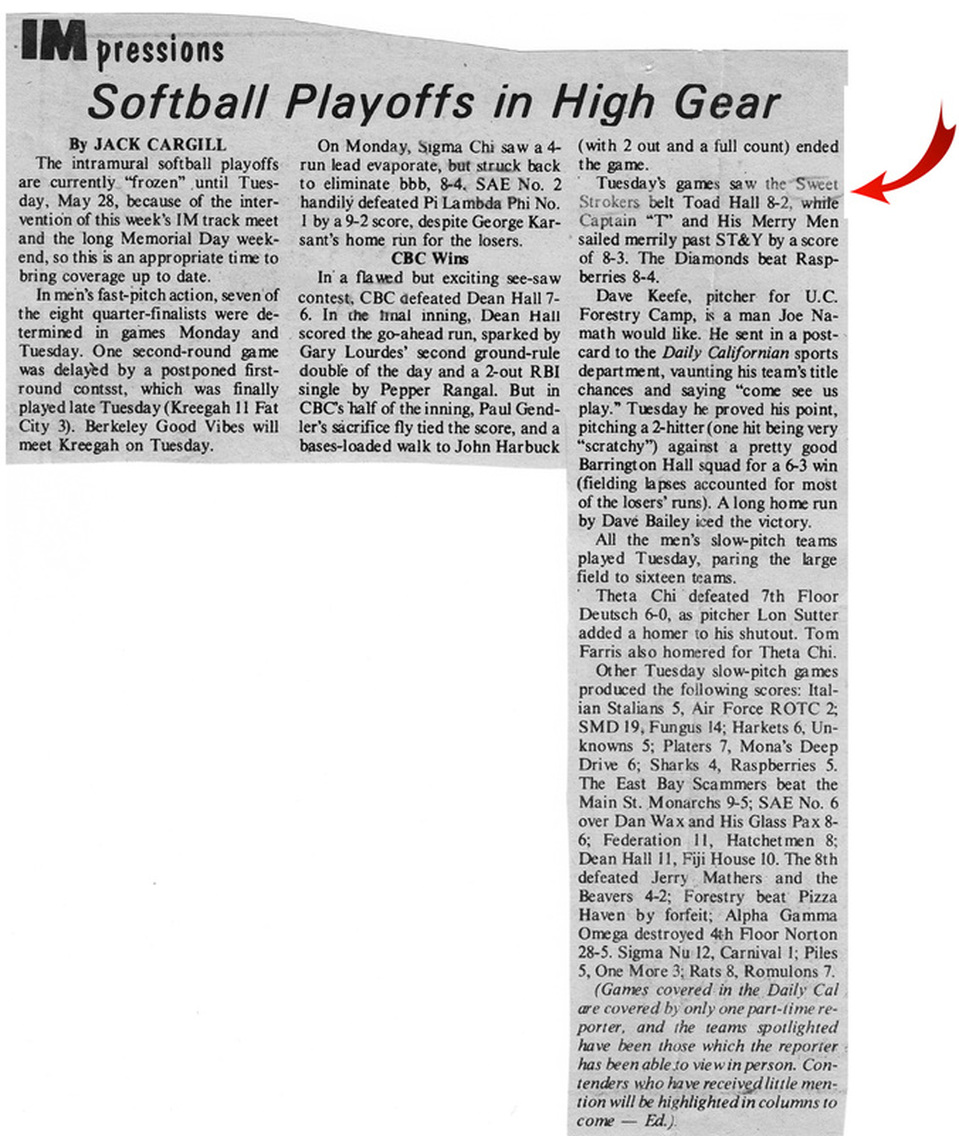 At University of California, Davis in the 1970-71 and 1971-72 school years, we had a talented team of softball players that went by the name of the "Bushwhackers." We had a fast-pitch and slow-pitch team. A number of us lived in the Webster-Emerson off-campus garden apartment dorms on Oxford Circle in Davis. Steve Williams had put the team together along with Kenny Waters a couple of years earlier I believe, before I arrived at Davis. Steve played shortstop, I played third, Kenny Waters played 2nd base, and our pitcher was Bruce Tronoff. Other players included Bob Rappleye, Jim Trockel and Steve Medawar.

I remember that there were some excellent fast-pitch pitchers at UC Davis. Probably more than at UC Berkeley - not as a percentage but as an absolute number. Even a number of the professors were really good, though no professors played directly against us in our student intramural leagues; I did observe some faculty-staff leagues and there learned about the depth of "faculty and staff" fast-pitch talent on campus. I don't know if it was in the air or the water or the Central Valley that breeds these excellent fast-pitchers or what. Maybe the proverbial farm boy story applies, where a guy growing up spends hours working on his pitches, throwing against a barn door until perfection is achieved. It does take time to develop oneself into a strong pitcher; many today don't have the time or the patience to develop any skills - it is an instant gratification era. {Look at most millenial rock bands today (changing subjects). These turkeys can't even play their musical instruments or sing - it is like they spent five minutes practicing and said "hey, good enough... we got a participation trophy from mommy as kids anyway - why should I take time to learn an instrument? Mommy said I was good, after all! Sorry - tangent!}

Continuing: It is rather sad that fast-pitch softball, though actively practiced by girls and women in college, is becoming somewhat of a lost art among men - you see many major women's college softball teams, but you don't see as many men's fast-pitch leagues these days and that is not right! It is a great game. Home grown male USA fast-pitch pitchers are not as common - from what I have read, more men pitchers days are coming from Australia, New Zealand and Mexico!

Back to UC Davis: there certainly was no lack of excellent softball fields available at Davis; it was a huge campus with acres and acres of beautiful manicured grass fields and many nice softball diamonds. And every summer around 4th of July the the City of Davis holds a huge regional slow-pitch tournament that draws teams from all over Northern California. In fact, a few years following my time at UC Davis, a number of us from the UC Berkeley intramural team - The Sweet Strokers (see above) - put together a team for the double elimination Davis tournament and played a couple of different summers. I don't believe our Bushwhackers team ever played in that tournament when I was at Davis for that two year period. But the Bushwackers continued and became a bit of an institution, winning some UC Davis intramural championships a few years later. Sorry I wasn't there!