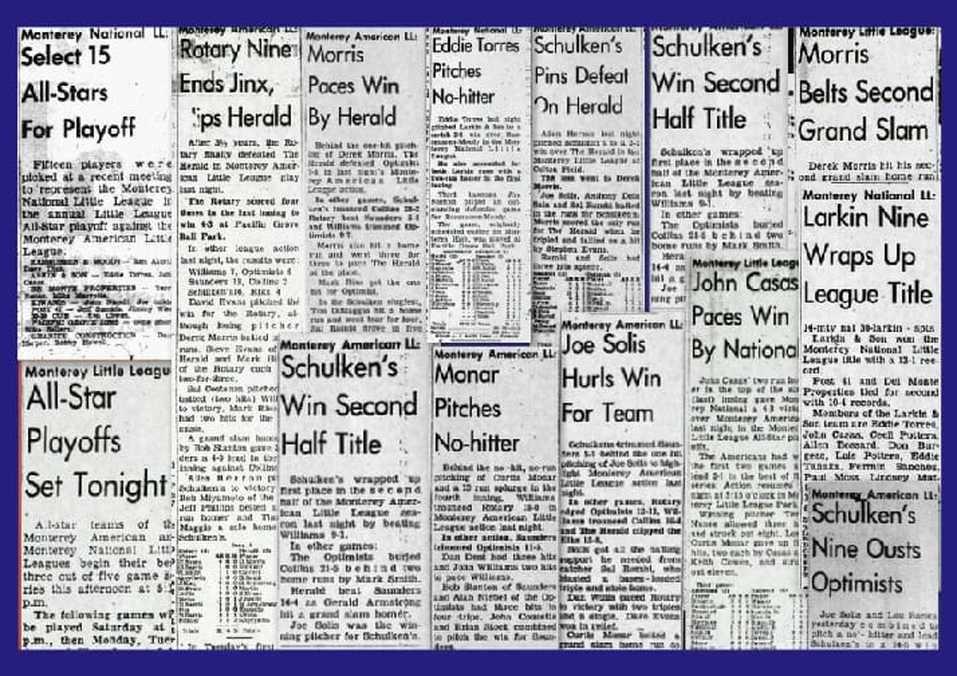 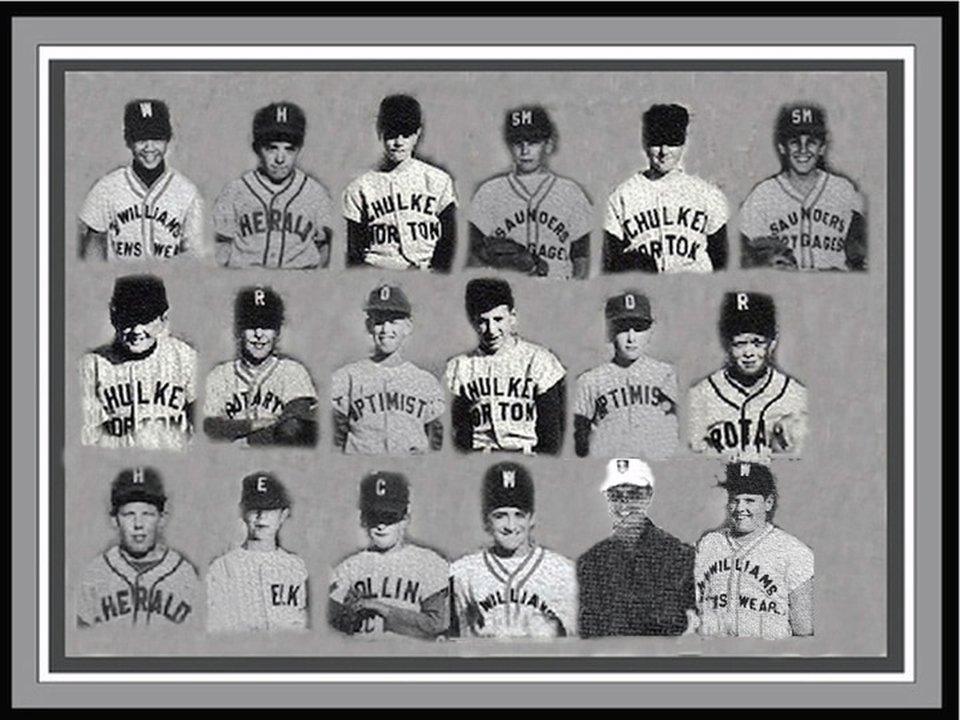 The "still" photos shown on the Little League team photo yearbook page were "extracted" from a recently-converted "Super 8" film of the Monterey Little League All-Star Tournament. The YouTube video is below also.

Special thanks to Mark Smith for providing the film and arranging for the conversion to DVD. And thanks also to Mark's parents Mr. & Mrs. Wilson Smith for making the great effort in doing the filming quite a long time ago!

Note that there was very limited all-star footage to begin with - a total of about 4 minutes! In the extracted "still" photos, we made every effort to show all members of our American League team who appear in the footage. And many National League players are still unidentified; please email me if you can provide any names. ~DM
Also, the song "Curve Ball" is written and performed by Robert Stanton, a member of our American League All-Star team and 1964 American League Home Run Champ.

(NOTE: the video has embedded captions identifying players, coaches, etc. The captions can be best viewed while using a Mac or PC or Chromebook, but will probably not appear on Android or IOS mobile devices. So best to view the video on a desktop computer to see the captions.)
"Curve Ball"
A Song Written & Performed by Robert Stanton
Monterey Little League (1964 Season)
Final 1964 Team & Batting Statistics American League
1964 SEASON - FINAL TEAM STANDINGS:
(To be added, see above)
1964 SEASON - BATTING STATS:
(To be added, see above)

(Statistics compiled by Don Davison.)
1964 Team Standings and Team Statistics - At Mid-Season
Note that 1964 league-leading (and eventual league champion) Schulkens had a phenomenal 81 "runs for" and only 21 "runs scored against" them at this season half-way point. And at the end of the year their stats were 177/56 = 3.16. 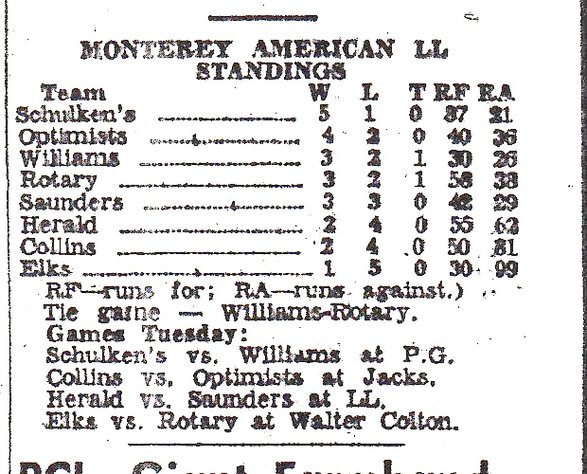 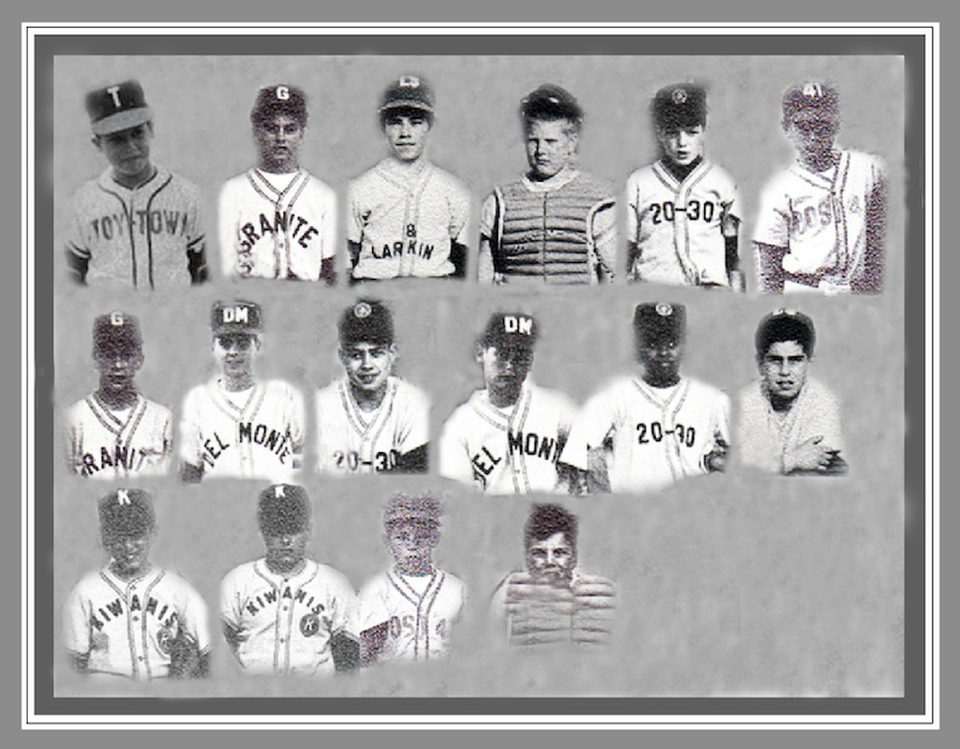 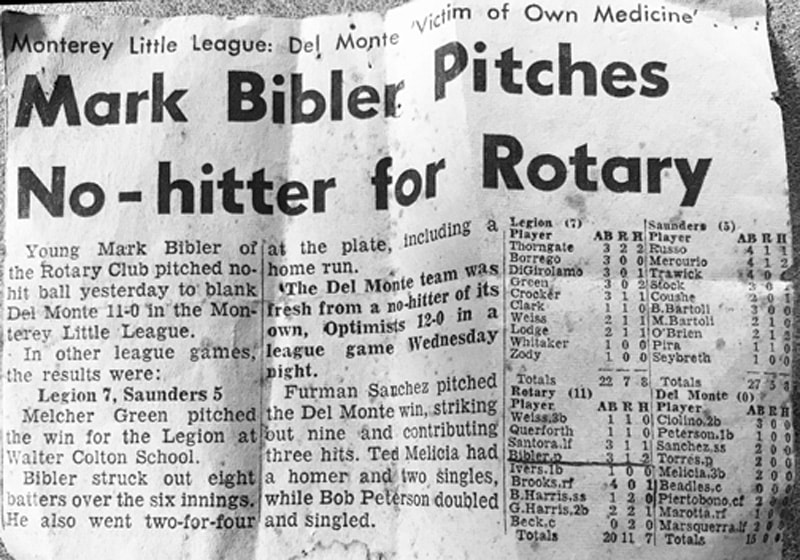 Young Mark Bibler of the Rotary Club pitched no-hit ball yesterday to blank Del Monte 11-0 in the Monterey Little League.
In other league games, the results were:
Legion 7, Saunders 5
Milchor Green pitched the win for the Legion at Walter Colton School.
Bibler struck out eight batters over the six innings. He also went two for four at the plate, including a home run.
The Del Monte team was fresh from a no-hitter of its own, Optimists 12-0 in a league game Wednesday night.
Fermin Sanchez pitched the Del Monte win, striking out nine and contributing three hits. Ted Melicia had a homer and two singles, while Bob Peterson doubled and singled.
1964 LL SEASON (CONTINUED)

Behind the one-hit pitching of Derek Morris, The Herald defeated Optimists 7-3 in last night's Monterey American Little League action.
In other games, Schulken's trounced Collins 20-2, Rotary beat Saunders 5-4, and Williams trimmed Optimists 9-7.
Morris also hit a home run and went three for three to pace The Herald at the plate.
Mark Riso got the one hit for Optimists.
​In the Schulken slugfest, Tim Dimaggio hit a home run and went four for four. Sal Rombi drove in five runs and Joe Solis went four for four.
(from Monterey Herald, May 1964)

​After 3 1/2 years, the Rotary finally defeated The Herald in Monterey American Little League play last night.
The Rotary scored four times in the last inning* to win 4-3 at Pacific Grove Ball Park.
In other league action last night, the results were:
Williams 7, Optimists 6
Saunders 13, Collins 2
Schulkens 14, Elks 4.
David Evans pitched the win for the Rotary, although losing pitcher Derek Morris batted in two runs. Steve Evans of The Herald and Mark Bibler of the Rotary each went two-for-three.
Sal Costanza pitched and batted (two hits) Williams to victory. Mark Riso also had two hits for the Optimists.
A grand slam home run by Bob Stanton gave Saunders a 4-0 lead in the first inning against Collins.
Alan Herren pitched Schulken's to victory over Bob Miyamoto of the Elks. Jeff Phillips belted a two-run homer and Tim DiMaggio a solo homer for Schulken's.
Chris Stanley hit a home run in the last inning to cap a six run rally for Williams.
(from Monterey Herald. June, 1964)
*Editor's note: For the record: I actually remember this game - particularly because an old friend, Mark Bibler, was on Rotary and he remembers the game and has painfully reminded me of it! ... I think I still have recurrent PTSD from the experience! ...
ALL four runs scored by Rotary in that last inning were unearned, caused by a series of errors by two Herald infielders who shall remain nameless! I don't think Rotary got a single hit in that final inning!
Note that the article doesn't name a "hero" on Rotary who drove in the "winning run" ... because that person doesn't exist! Rotary won by a series of fumbling and bumbling by a couple of my hapless Herald teammates.
But seriously, it's all water under the bridge many many years ago... I'm not bitter... I've gotten over it... I'm fine now... seriously ... just fine... just fine...​ 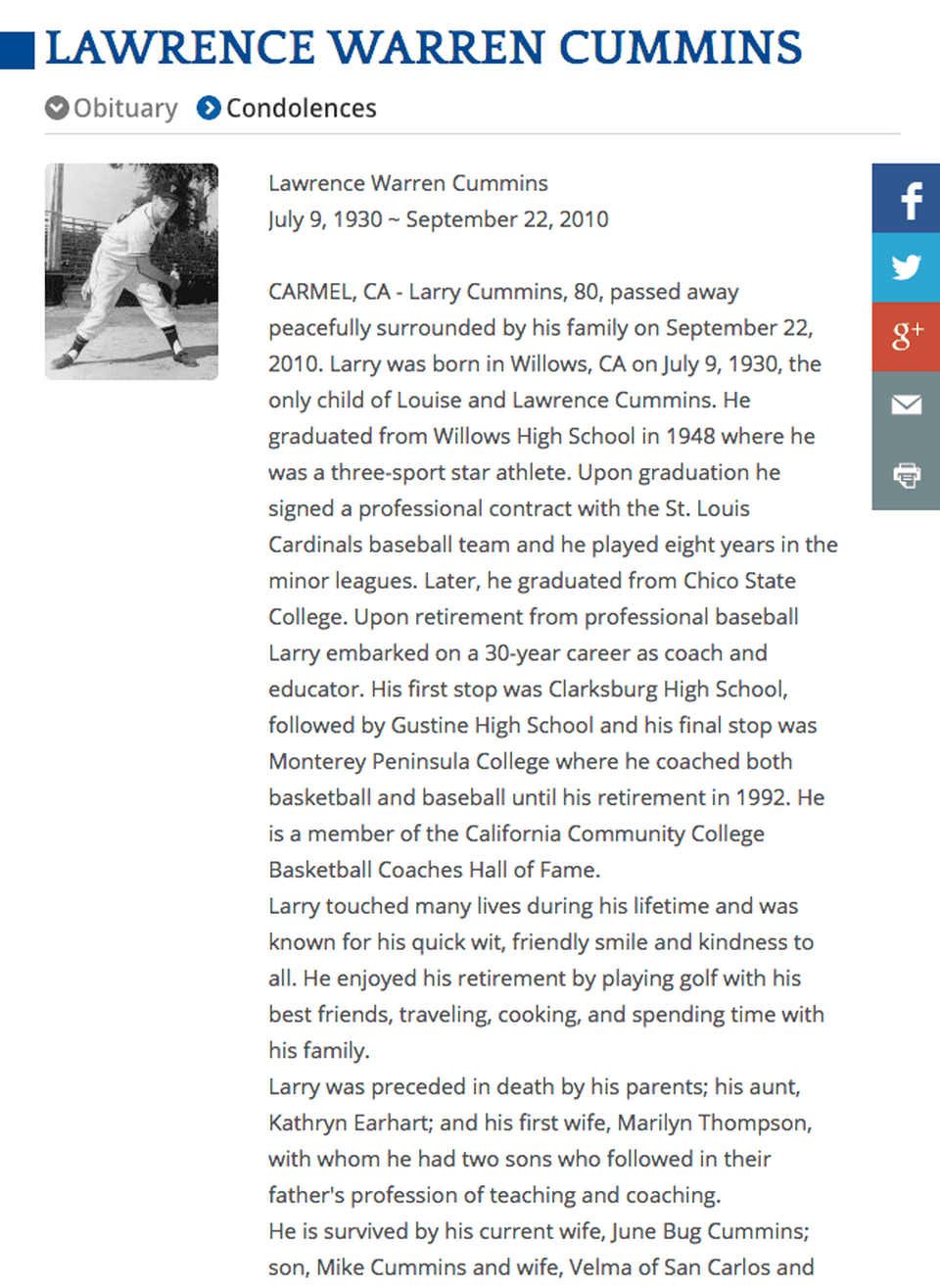 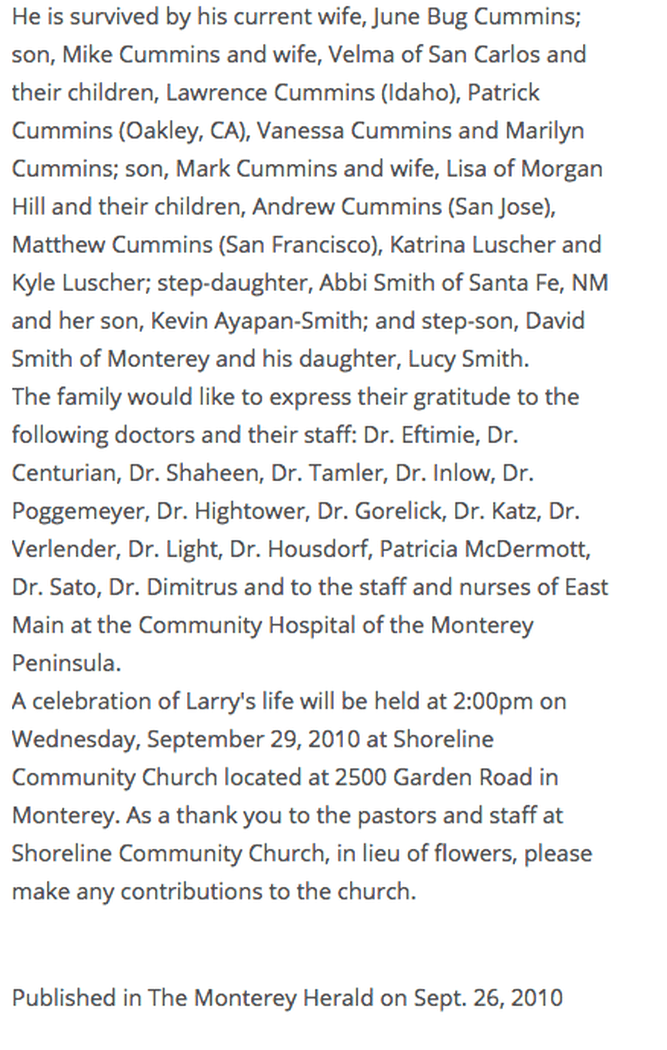 I got to know Coach Cummins when I was about 10-11 years old and very active in Little League in the early 1960's. I lived close to Monterey Peninsula College, and one day I was riding my bike on campus and was watching the MPC Lobos baseball team practice and got an idea. The next day I showed up at practice with my mitt and cleats and went up to Coach Cummins and asked if I could help out in any way. Pretty soon Coach Cummins had me working - feeding him baseballs that he would blast out to the outfielders using a fungo bat in an outfield drill. I'd receive the outfielders' direct throws and collect the baseballs and keep feeding them to Coach Cummins so he could keep that fungo drill moving. And Coach Cummins hit those shots high and deep! He had great control over that long and narrow fungo bat, which some have likened to a combination of baseball bat and broomstick. At that point I had never even seen a fungo bat before. I helped out in a similar fashion in some various other drills, including infield practice. I got to help out at a lot of practices during the 1962 season in particular.

I was as a "batboy" in only maybe two or three team games. I really didn't have much interest in being a batboy and preferred the practices to actual games because at practices I would actually get to catch and throw the ball with other players on the MPC team! Schlepping bats around for others did not seem that appealing! Also, as I recall, my school schedule somehow did not fit with the MPC team home game schedule anyway. But when I showed up at practices later in the afternoon, which I did quite frequently during the 1962 season, Coach Cummins always had something for me to do. And I also remember being treated great by the MPC players themselves; they were a fun, upbeat group of people and treated me, a 10-year-old kid, quite well. I'm sure their standards of behavior were set from the top down; I've learned that Coach Cummins ran a tight ship and encouraged mutual support among the team members and didn't put up with any players with "attitudes." Players with attitudes were reportedly soon gone. When they saw that I was good at catching their throws and catching the occasional fungo pop fly that came my way, they were very encouraging, joking around to Coach Cummins with comments like "hey Coach, sign this kid up," or "get this kid on the team" etc. That kind of stuff. It was a great experience as a 10-year-old kid for me to get to "practice" with a bunch of college baseball players and get positive feedback from them.

Last time I ran into Coach Cummins was in around 1990 when I was in town visiting and was running on the track at MPC. I popped in to use the weight room and saw him and re-introduced myself and we had a nice chat.

In summary, Larry Cummins was simply a very high quality human being and a great adult role model and great coach. My condolences to the Cummins family. ~ Derek Morris

I recently learned a little bit more about how Larry Cummins came to MPC. This story is from John Jorgenson who grew up in Gustine, CA (a small town near Merced in the Central Valley) and who himself was a coach and college basketball referee for many years. Larry Cummins started his coaching career as a teacher, basketball and baseball coach at Gustine High School. His Gustine team was invited to the Carmel Invitational Basketball Tournament every year, and through the tournament he got to know some local basketball people and started to get noticed by the athletic department at MPC. He was encouraged to apply for the head basketball coach position at MPC that was opening up and he got it. He stayed at MPC until retirement in 1992. Though he was head basketball coach throughout his career at MPC, he resigned his baseball coaching duties in the mid 60's to more focus on basketball, handing over head baseball coaching duties to the newly hired Chris Pappas.
1963 LITTLE LEAGUE SEASON CLIPPINGS

Top batter in the Monterey American Little League first half was Ricky Riso of the Optimists with a .563 mark.
The league second half resumes tonight at four ball parks.
Joe Cutrufelli of The Herald and Alton McSween of Collins have belted two home runs. A dozen other players have one homer apiece.
(Monterey Herald - June 13, 1963)

Monterey Little League Managers have drafted 89 new players for the 1961 season.
The full teams with regulars from previous seasons will be announced at a later date.
All boys not making the Little League in Monday's draft will be selected by the Monterey Recreation Department Baseball League to be organized later this year.
Parents of Little League players are invited to a general meeting Monday at 8PM in the American Legion Hall. Plans for the 1961 season will be discussed. 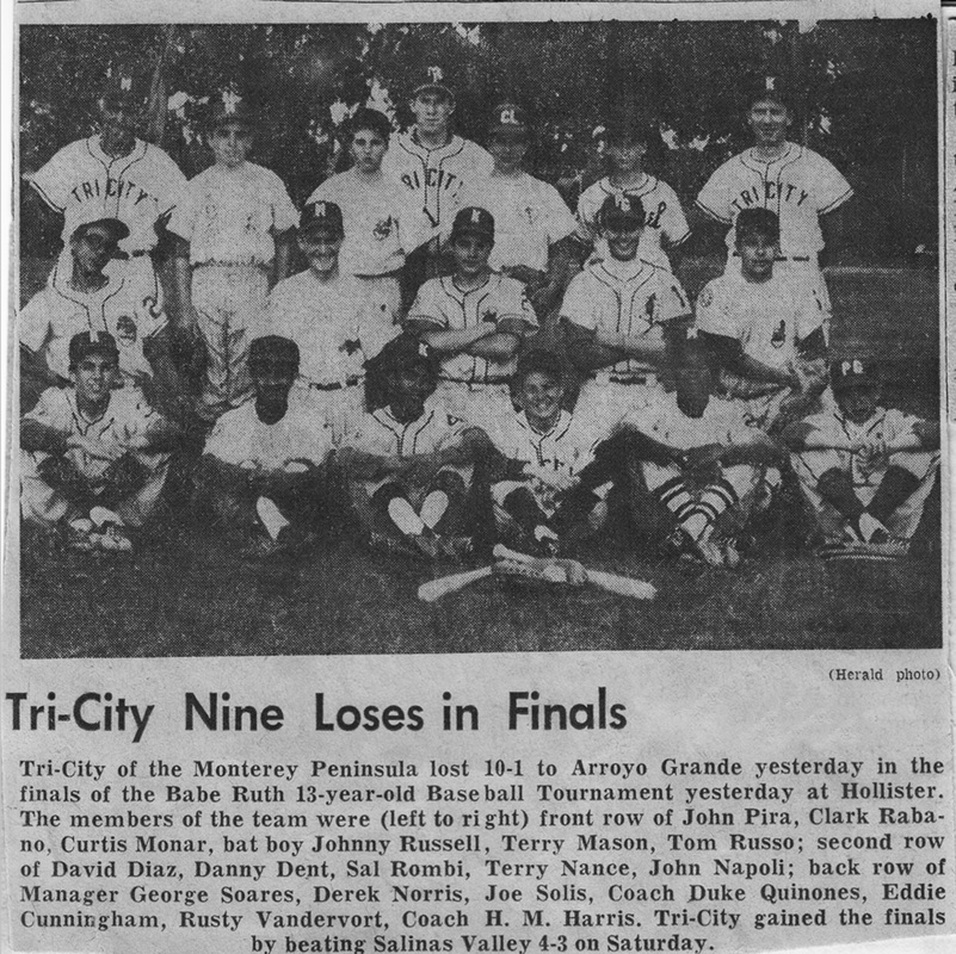 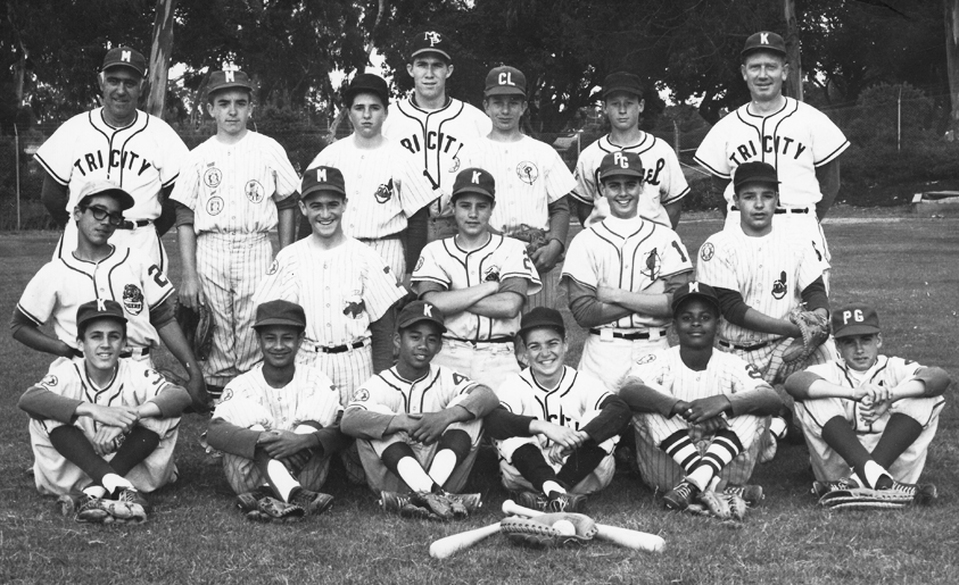 Tri-City of the Monterey Peninsula lost 10-1 to Arroyo Grande yesterday in the finals of the Babe Ruth 13-year-old Baseball Tournament yesterday at Hollister.

(Comment: We won the Monterey County 13-Year-Old All-Star championship (single elimination) at the Veterans' Memorial Park Ballfields in Hollister by beating Fort Ord, Hollister, and then Salinas Valley in the finals. We then lost in the regional finals to Arroyo Grande, winner of the San Luis Obispo County championship tournament that was held the prior week in San Luis Obispo. Arroyo Grande then went on to compete in the California State Championships in Hayward. Don't know how they did in that tournament!) ​ 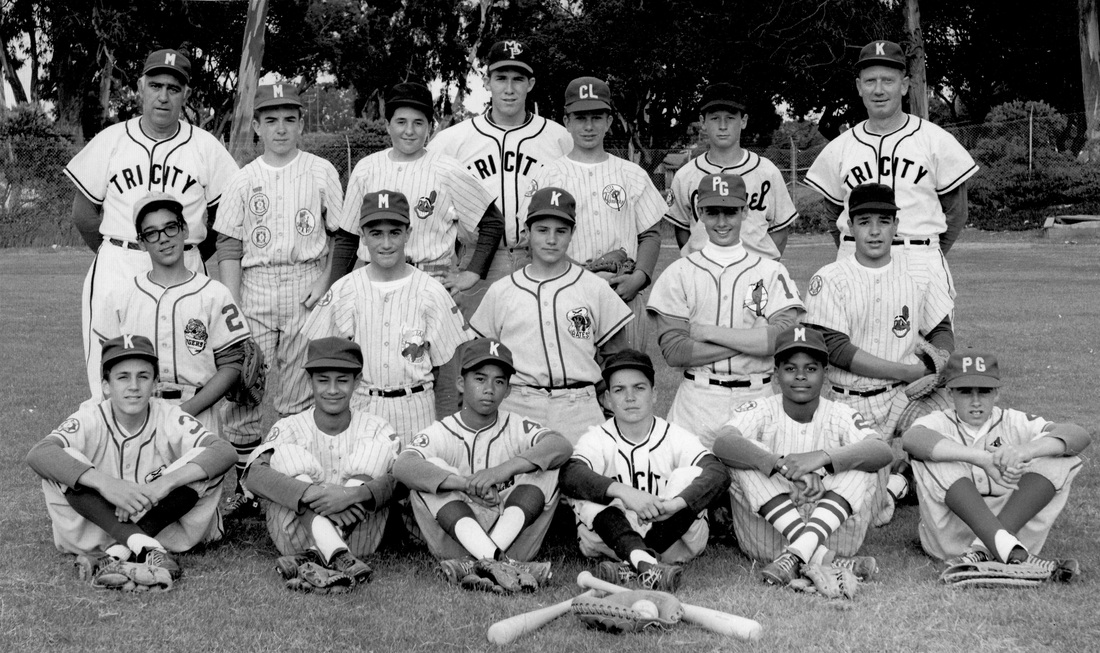 ​Babe Ruth 13-year-old Baseball Tournament
(1965 Season)
Tri-City Nips Ord
In Hollister Park
HOLLISTER - Tri-City of the Monterey Peninsula edged Fort Ord 4-3 yesterday in the first round of the first annual Babe Ruth 13-year-old Boys Baseball Tournament.
In the other game yesterday, Salinas Valley nipped Salinas 3-2.
As a result, Tri-City plays Salinas Valley today at 4 p.m. The 2 p.m. game pits first day winner Seaside against the winner of this morning's playoff battle between Hollister and Salinas.
The tournament opened Thursday with Seaside trimming Marina 17-9 and Hollister Battling Salinas to an 11-inning tie. ​
Tournament finals are tomorrow. The winners of this afternoon's games play at 2 p.m. tomorrow, then the survivor tackles the San Luis Obispo champion at 4 p.m. At stake is a trip to the state tournament opening Tuesday in Hayward.
The thrilling Tri-City victory yesterday was settled in the bottom of the seventh (last) inning. With the score tied 3-3, two out and two strikes on the batter, Sal Rombi laced a sharp hit to score the winning run.
Joe Solis started on the mound for Tri-City, but was relieved in the seventh by Terry Nance with a man on second, no out and a 2-1 count on the batter.
​Nance threw only 12 pitches, striking out three batters to preserve the 3-3 tie. 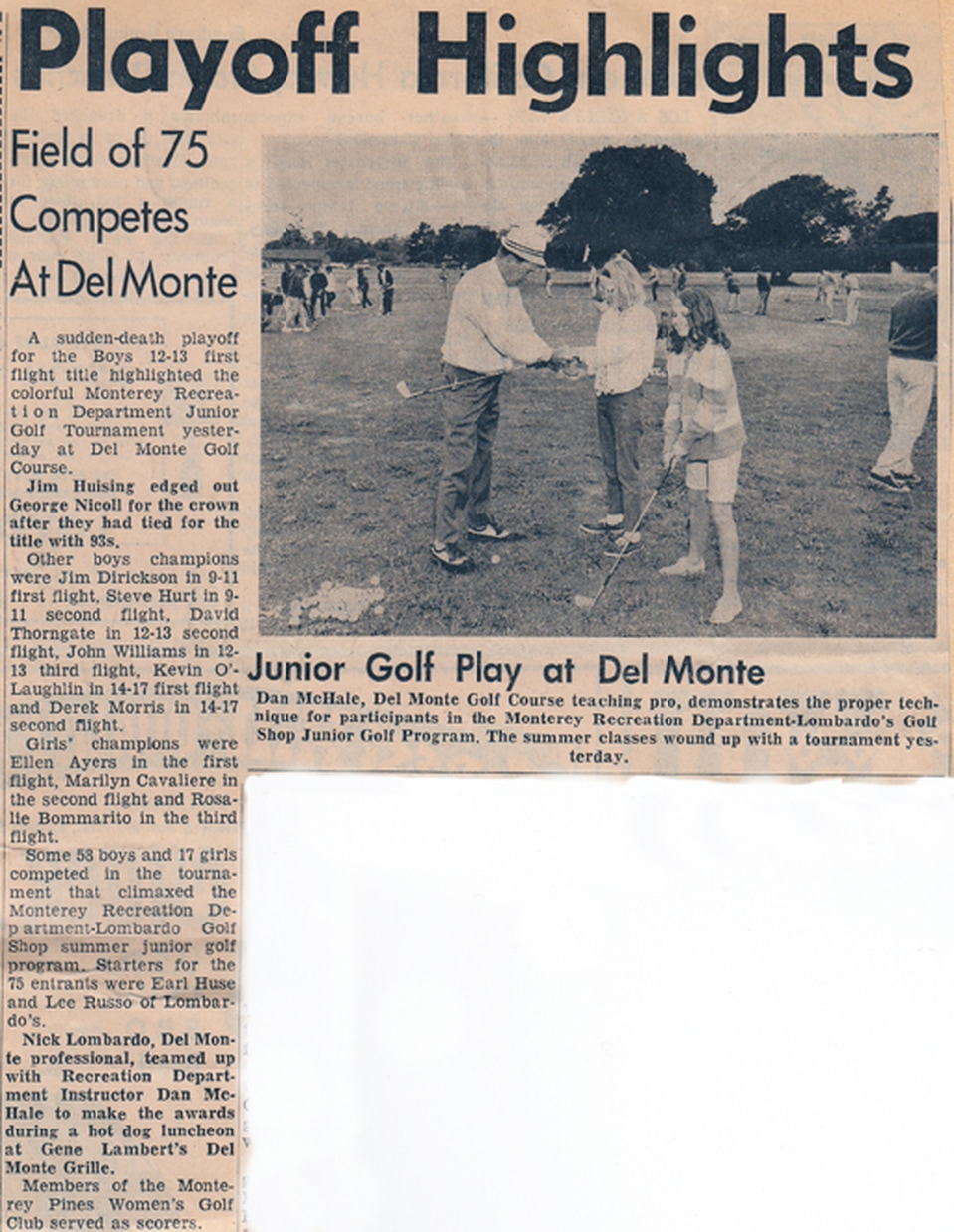 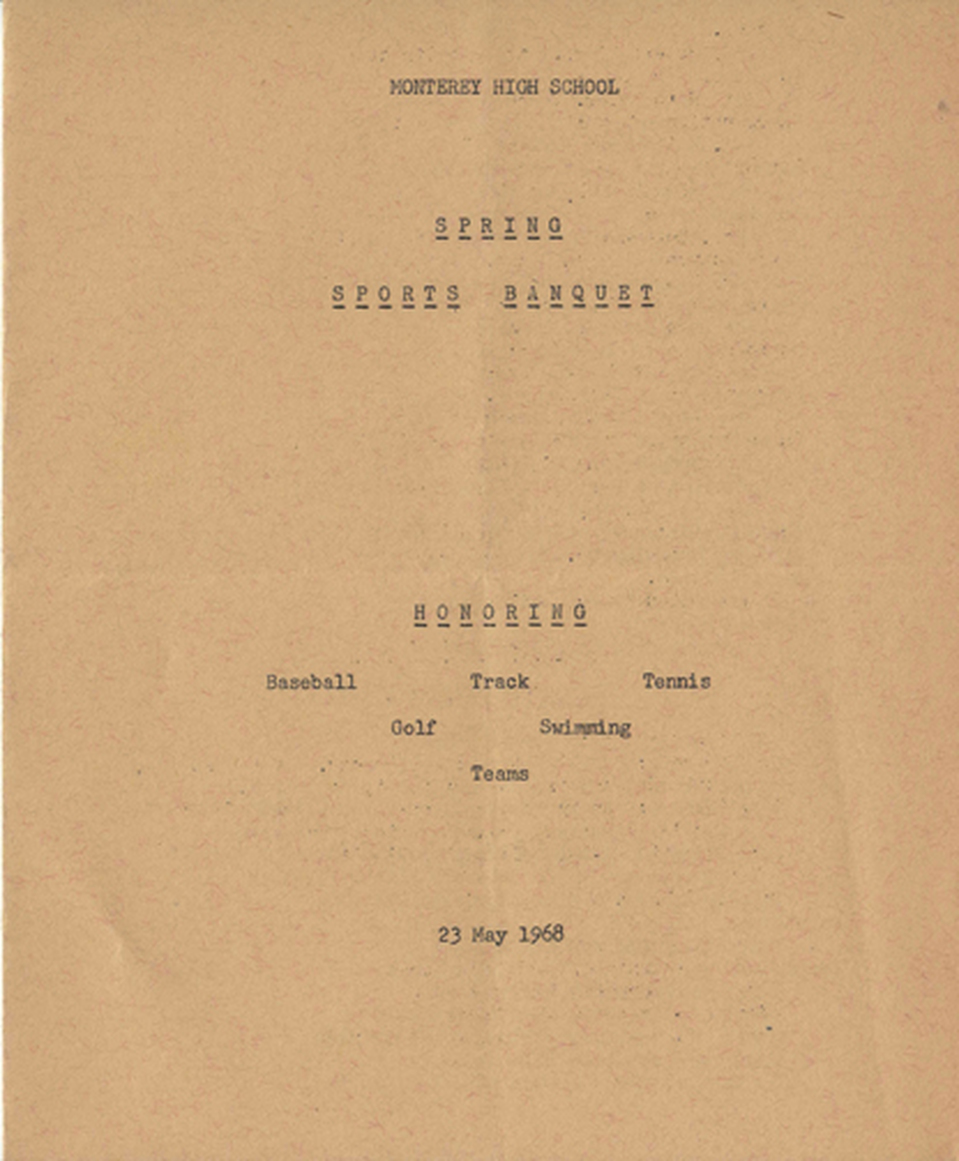 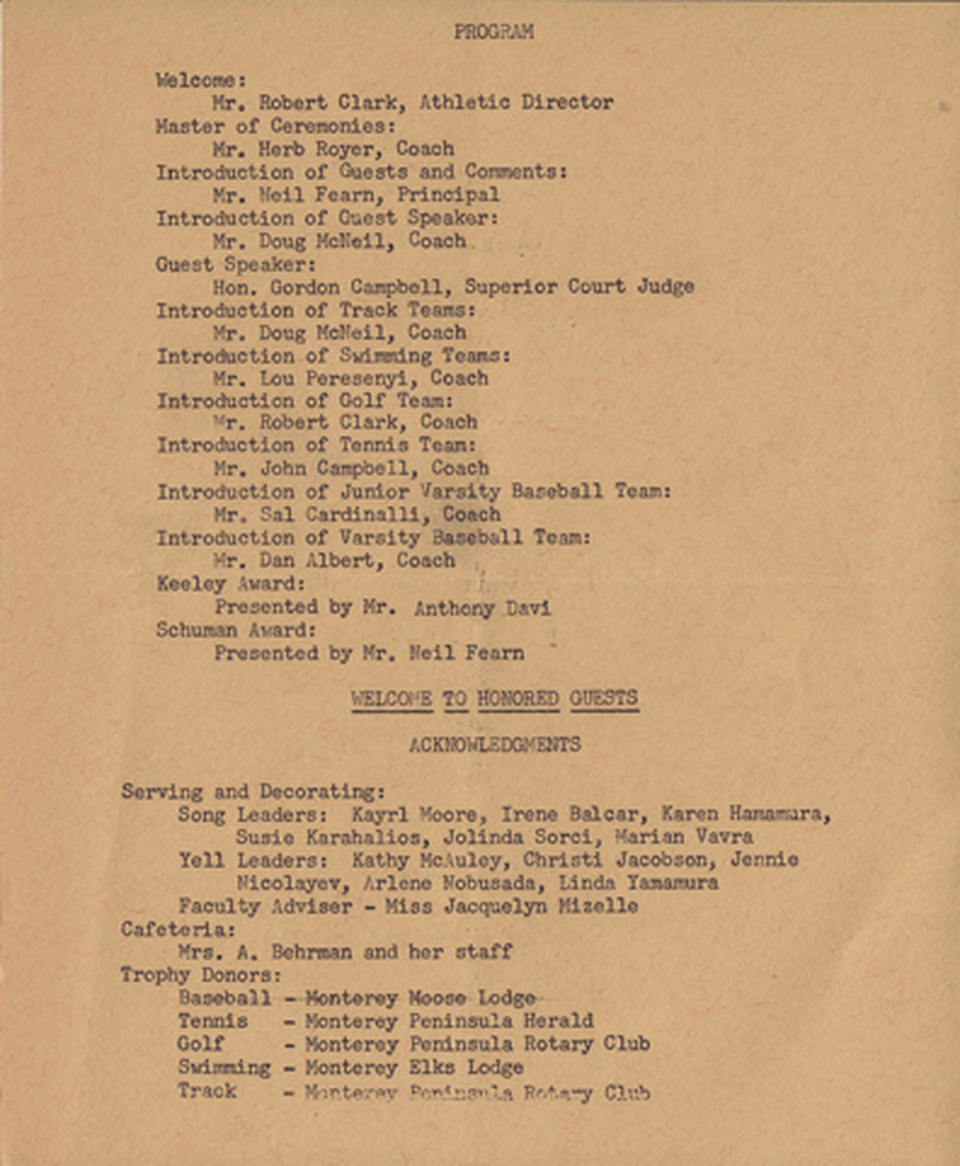 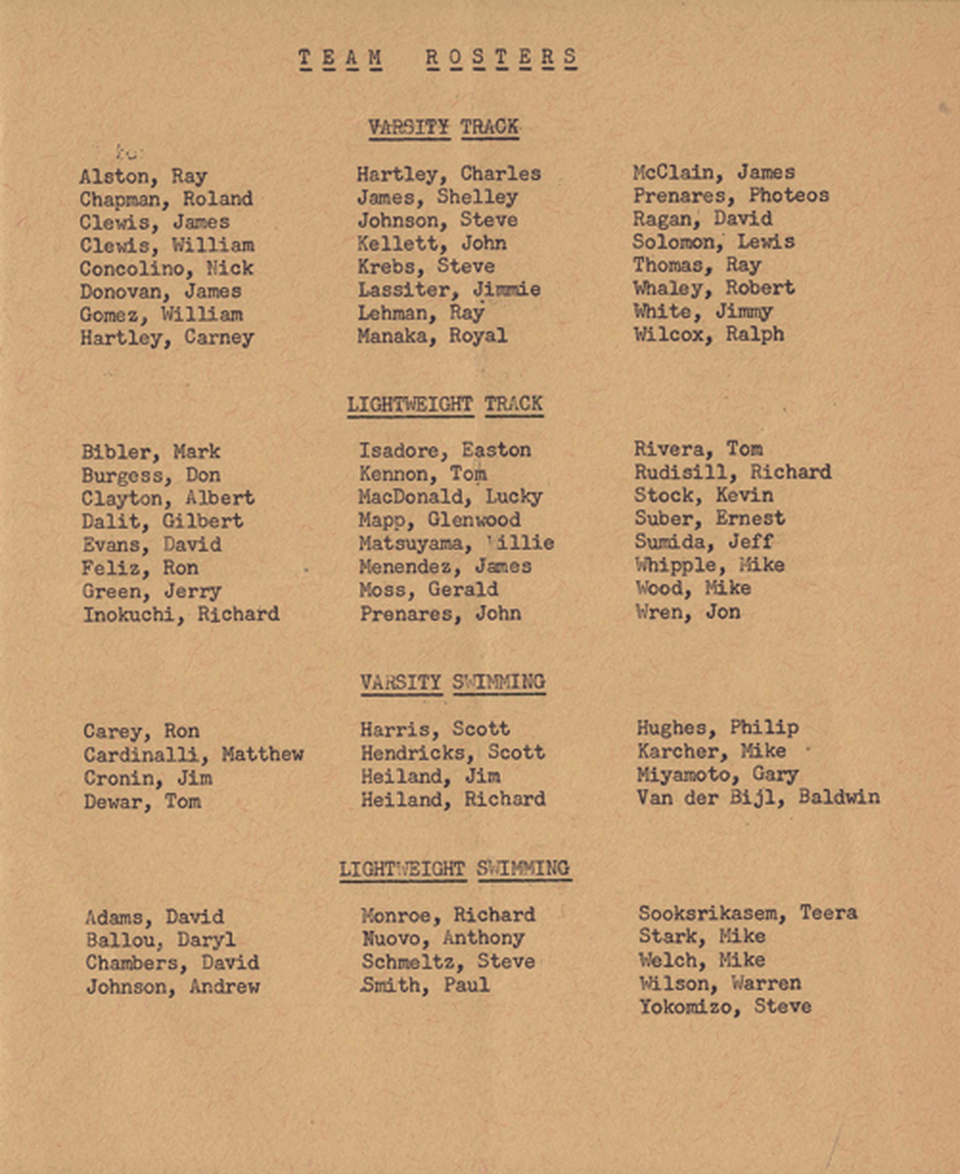 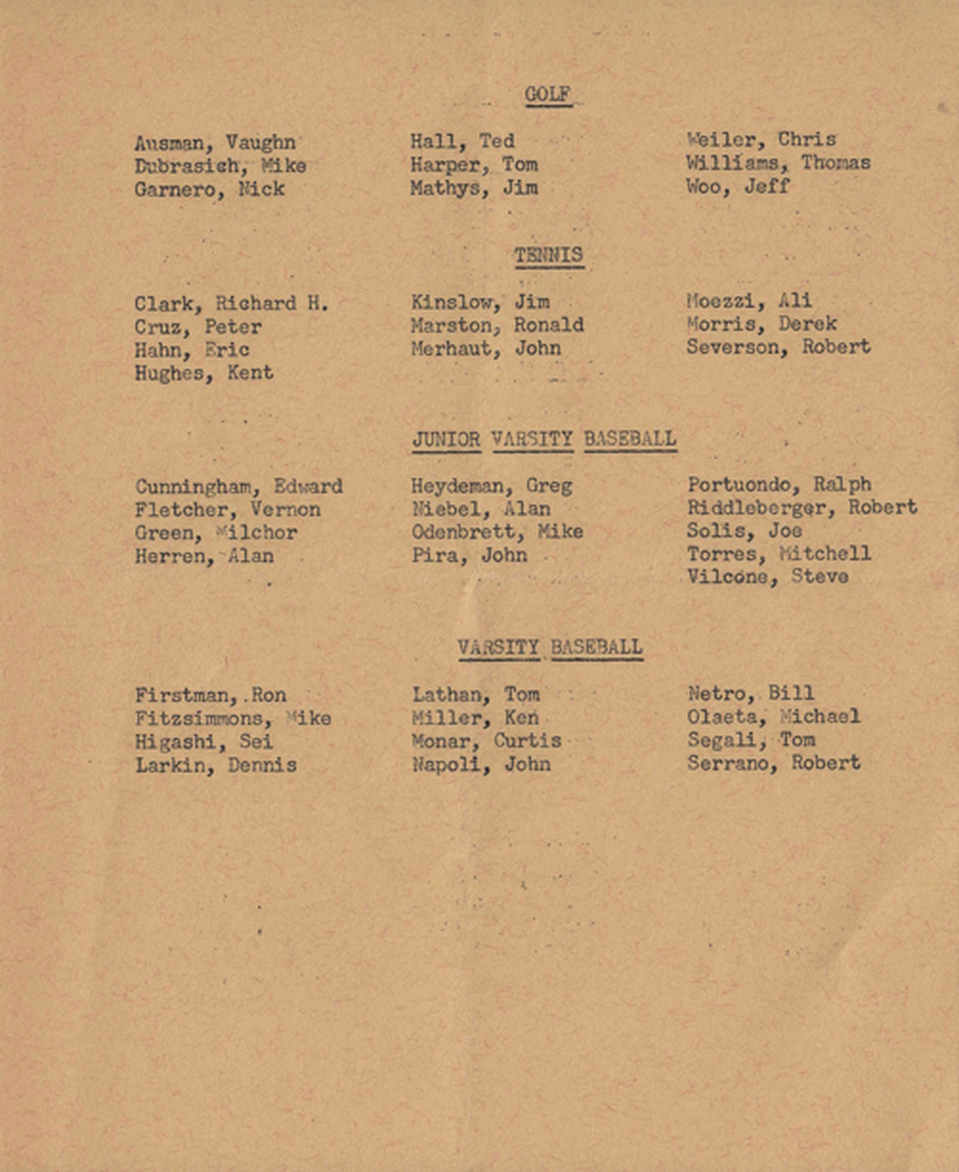 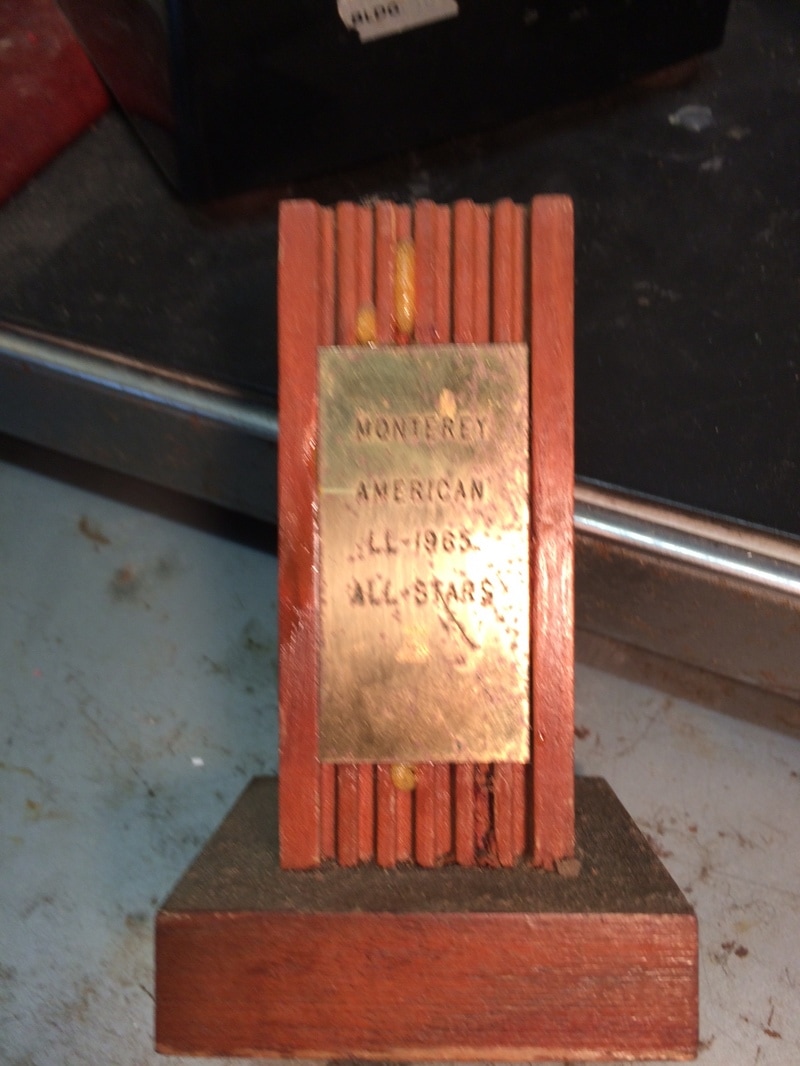 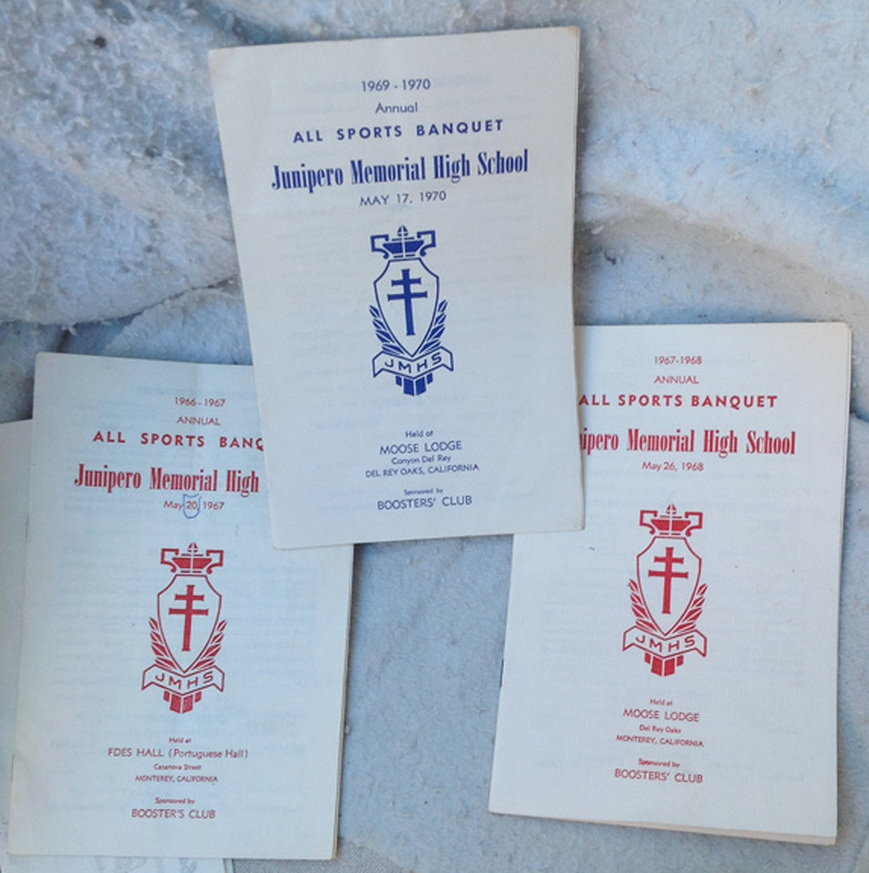 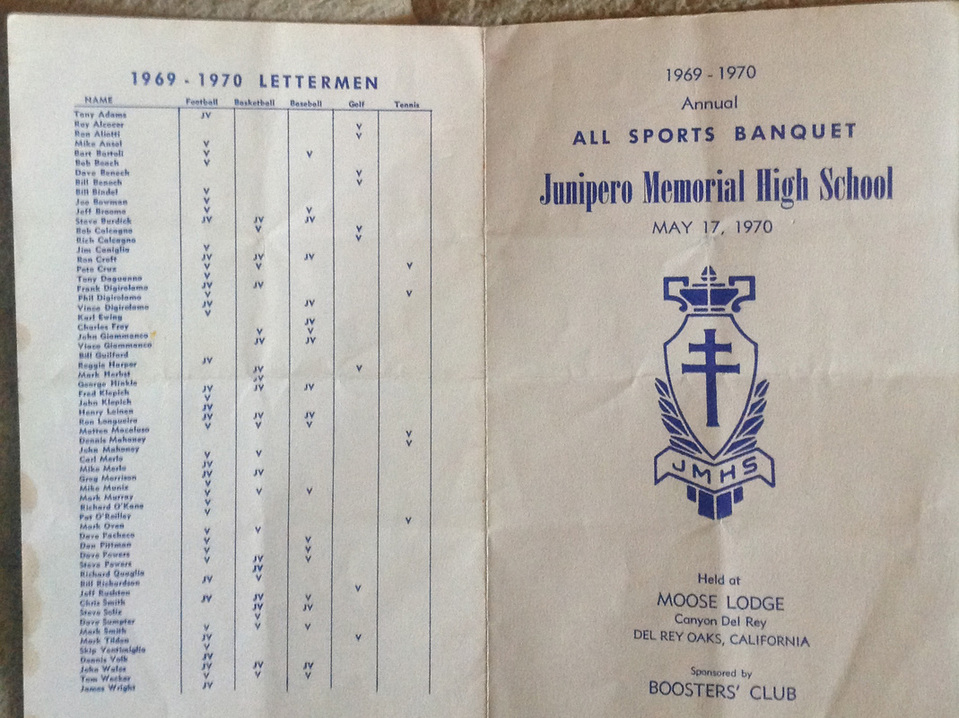 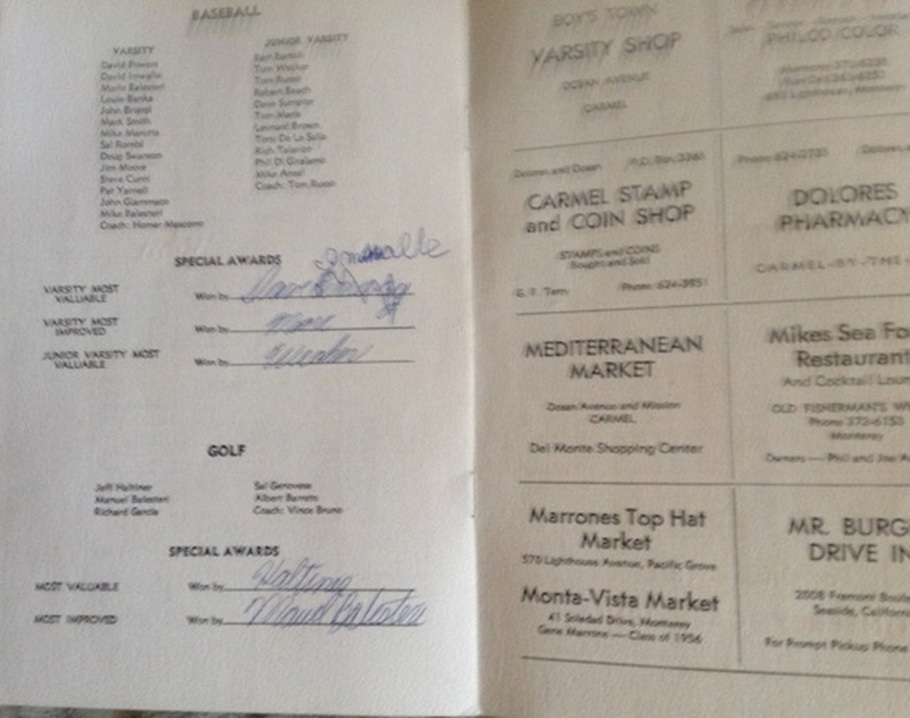 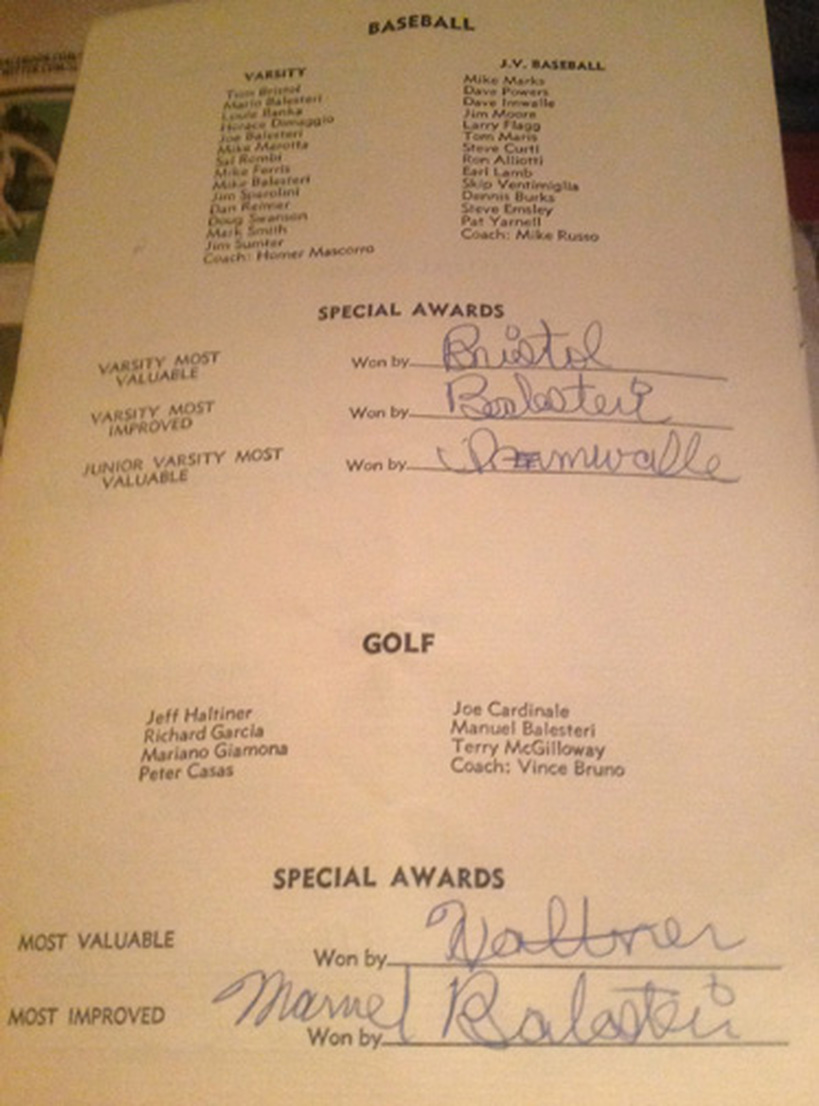 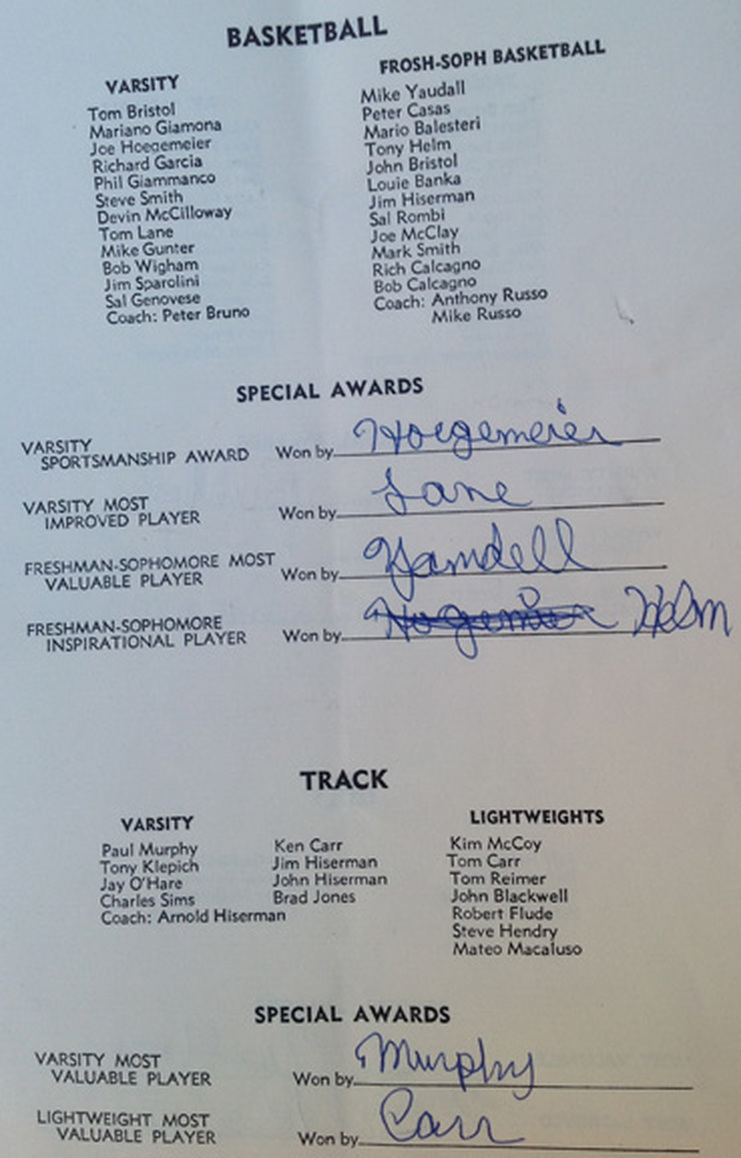 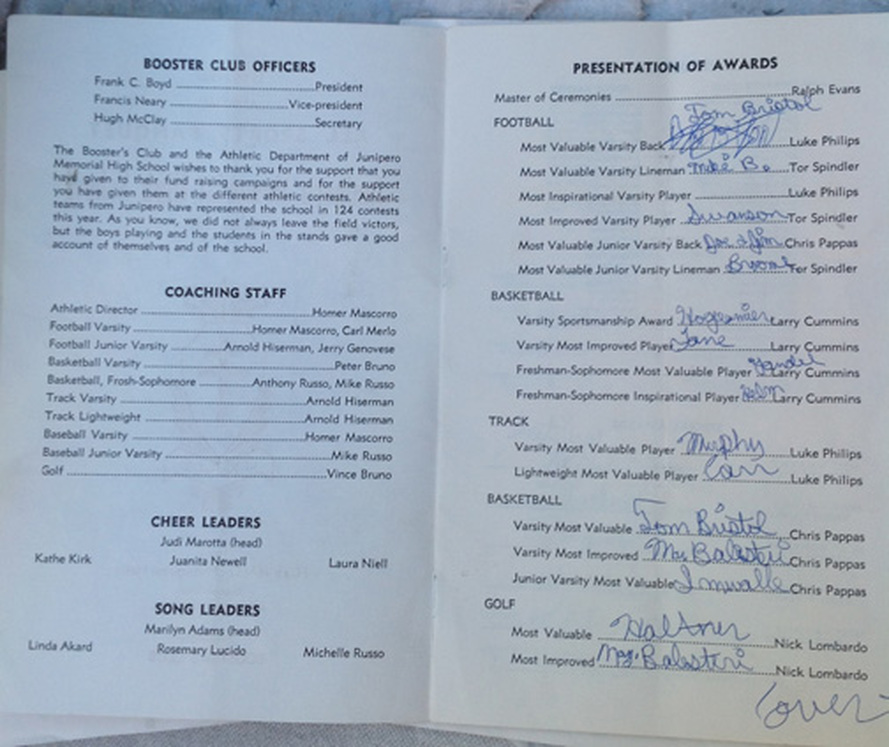 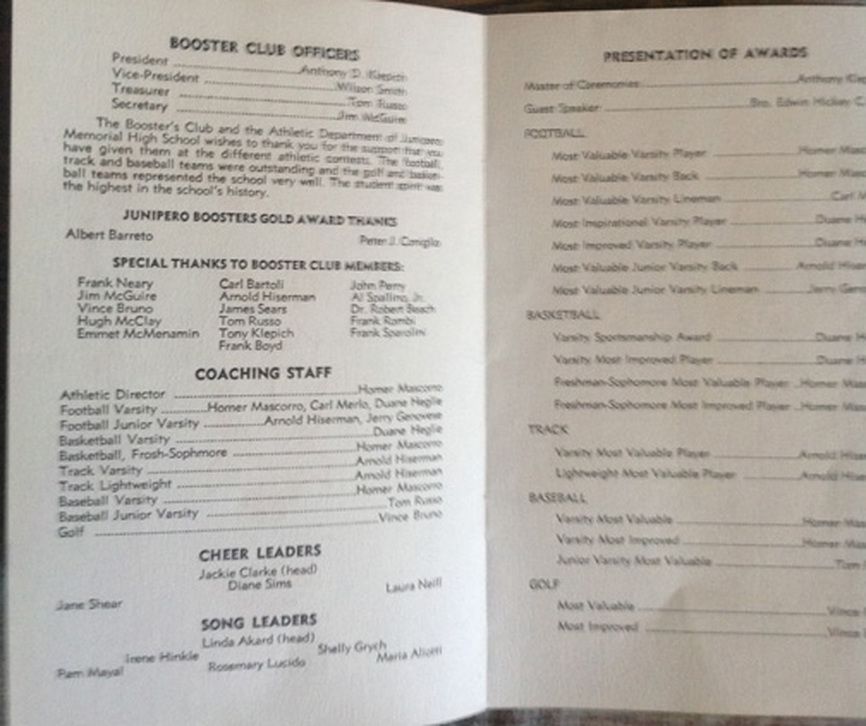 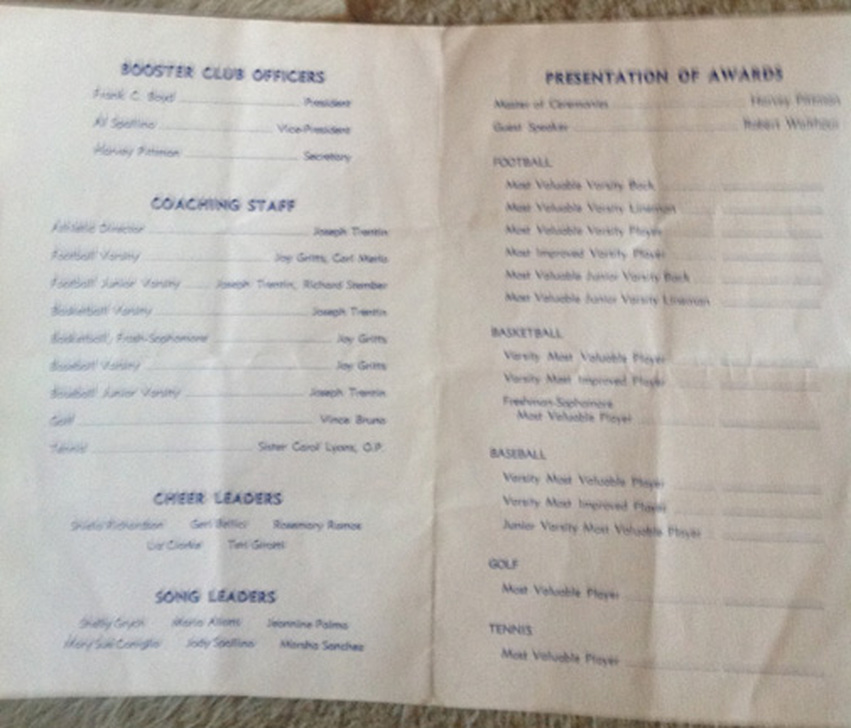