"MY RACKET" BY JACK FROST 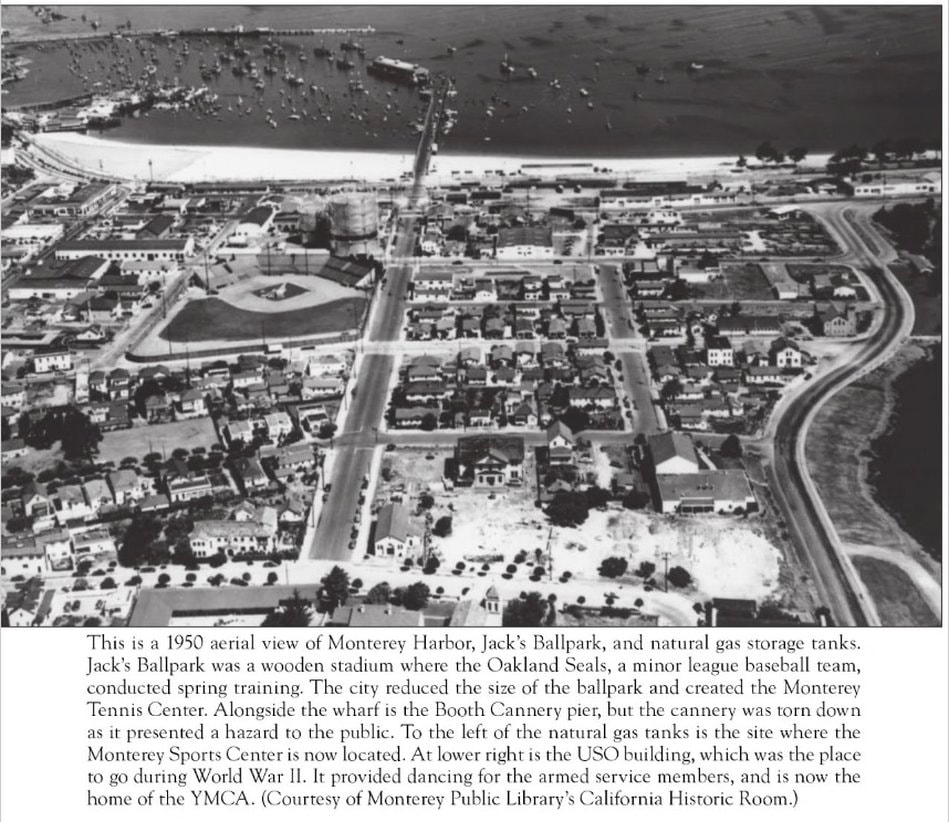 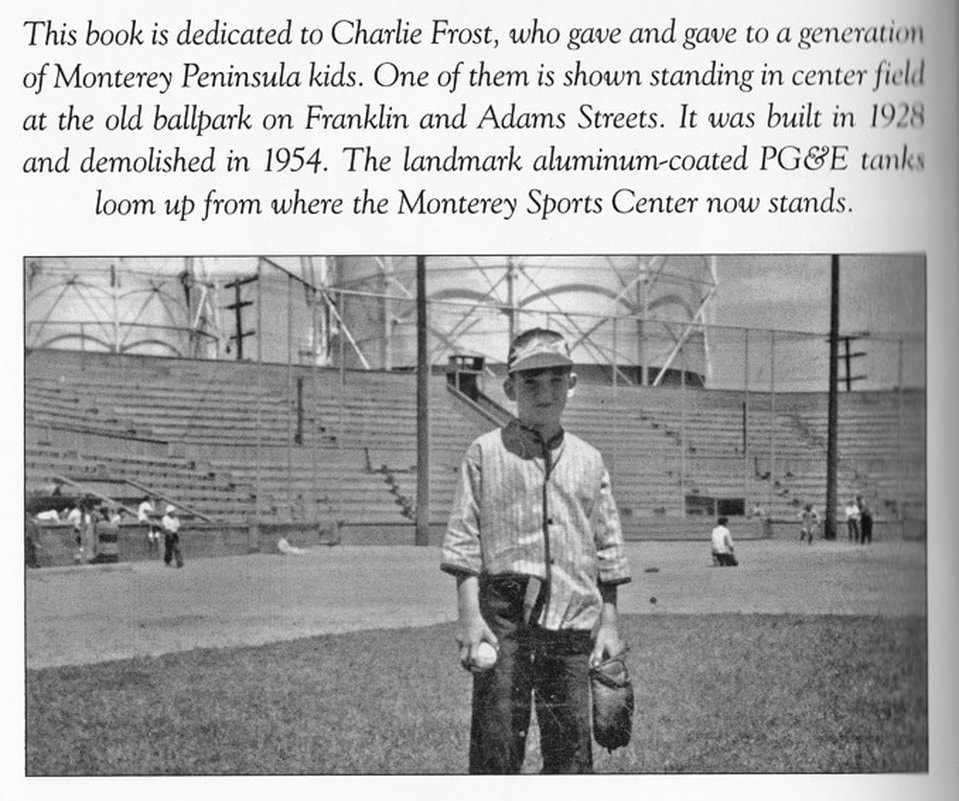 In the following pages are full chapters excerpted from the beginning of an autobiography + history book written by Monterey native Jack Frost. In the 50s and 60s, Jack was national champion tennis player who played Wimbledon five or six times and was on the US Davis Cup team. He is a scholar and has a PhD. in history from UC Santa Barbara.  (Jack's Wikipedia entry is reprinted below.)

Jack's father, Charlie Frost, was a businessman and community leader in Monterey and prior to, during, and after the WW2 years sponsored a number of local youth baseball teams. This was in the pre-Little League, pre-Babe Ruth, pre-American Legion baseball era where there was little organized youth baseball established anywhere. Teams organized by volunteers and parents from various cities would occasionally arrange games against each other but established local youth baseball "leagues" as such did not really exist. Charlie Frost would pay for equipment for kids out of his own pocket and drive his teams to the Bay Area to play teams from other towns. Hi wife, Mrs. Dorothy Hare Frost, even made all of the team uniforms! During this post Depression era, many kids were poor and could not even afford gloves or bats or baseball cleats. So many were very appreciative of not only being able to play but also having equipment furnished to them by Charlie Frost. Participating in youth baseball was huge part of their lives at the time that really made a difference. During the WW2 years Charlie Frost even used gas ration coupons allocated for his business to pay for fuel to transport his players to games in San Francisco, San Jose, Burlingame, Santa Cruz, Watsonville, Hollister and other cities out of the Monterey region. Charlie Frost was really a key early supporter of youth baseball in the Monterey Peninsula. He was recognized one year in the 1950's as Monterey Citizen of the Year.

In 2007 Jack Frost published a fascinating book entitled Monterey Peninsula's Sporting Heritage. (Amazon link is here). As a Monterey native who played youth sports there in the 50's, 60's and 70's, I found this book to be a wonderfully comprehensive look at Monterey Peninsula athletes, teams, coaches, and even local athletic fields. Time period covered is the early 1900's through the mid-late 1950's - with emphasis on 30's, 40's and 50's. There are separate sections on baseball, football, basketball, tennis, swimming, golf, and even horseback riding. The depth of the research and quality of the many pictures that Jack was able to access is phenomenal. Most of the pictures came from personal collections that the author was able to track down through his extensive local contacts, and some are also from various library research departments - particularly Monterey Library California History Room headed by historian Dennis Copeland. The book delivers great photos and stories of people succinctly without being a long winded word-heavy historical treatise. It is a fun to read photo reference book that I find myself picking up, learning something new, putting it away, and picking it up again. One thing that blew my mind that I wasn't aware of: Jacks Park, the baseball field where we all grew up playing Little League, Babe Ruth, and Rec league games, once had wooden bleachers with capacity of 7000 people! The bleachers were built to hopefully attract a West Coast spring training major league team like the Giants or Dodgers. New YorThe bleachers were built in the late 1920's before the stock market crash and bank collapse of 1929 when money was pretty loose and business seemed to be apparently "booming." Well, the crash happened and the Depression hit and ultimately no major league team ended up ever playing at Jacks Park. Apparently the Oakland Seals minor league team played a few games there but the bleachers were essentially underutilized for twenty-five years. They were a bit of an overly-optimistic boondoggle and they lasted from the late 20's until the early 50s when they were finally dismantled. A couple of photos of the Jacks Park bleachers from two different book sources are above and there are many others taken from Jack Frost's book in the derekmo.net/littleleague section of this website.

Anyone who grew up in Monterey and played youth sports in the 50's, 60's and 70's and beyond will recognize a lot of names and photos of the young players pictured in Jack's book. Many were coaches or teachers or uncles or parents or even older brothers of kids many of us grew up with. Again, the Amazon link is here.
~ Derek Morris

Tennis career
In 1949, Frost won the U.S. National Boys' (15-and-under) Championships at Kalamazoo, Michigan and the U.S. National Juniors' (18-and-under) three years later(1952). Following his win, he was awarded a spot on the four-man U.S. Davis Cup team to play against Canada. In the Fall he entered Stanford University, and in his senior year, 1956, he played in the final of the NCAA Singles Championship, losing to Alex Olmedo of U.S.C. A decade later he was inducted into the Stanford Athletics' Hall of Fame.

Following military service, Frost played the international tennis circuit between 1958–1963, competing in six Wimbledon Championships and getting out to the 4th round in 1960, before losing to Nicola Pietrangeli. He won the Irish and Wiesbaden (including the mixed doubles with Maria Bueno) and was in the finals of the South African, the Canadian, the Norwegian and the Good Neighbor. During the course of his career he had singles wins in major grass court tournaments over all-time greats Rod Laver, Roy Emerson and Vic Seixas and over numerous international Davis-Cup mainstays on various surfaces: Luis Ayala, Thomaz Koch, Mario Llamas, Antonio Palafox, Giuseppe Merlo, Istvan Gulyas, Bob Mark, Frew McMillan,Christian Kuhnke,Bob Hewitt, Gordon Forbes,Warren Woodcock, Billy Knight, Ron Holmberg, Dennis Ralston,Barry Mackay, "Jack Douglas" and Tom Brown.

Frost beat Whitney Reed at Newport on grass in 1961, the year in which Reed achieved the number one ranking in the U.S., and in 1954 he defeated Straight Clark at Forest Hills in one of the longest matches played there in the pre-open era.

Frost participated in the winning of several major doubles titles: Southampton (with Giammalva over Richardson and Holmberg), Puerto Rico (with Richardson over Contreras and Llamas), and a semi-final win with John Cranston over Laver and Neale Fraser at the Irish Championships. A top 10 player in the United States in 1961, Frost was also ranked number 1 in Northern California in that year. He was subsequently inducted into the Northern California Tennis Hall of Fame.

In 1964 Frost conducted a four-month good-will tennis program in Ghana on behalf of the U.S. Government and did another one in India in 1990.

Jack is retired and lives in Rancho Mirage, CA.

Academic
Frost received a B.A. from Stanford University, an M.A. from the Monterey Institute of Foreign Studies, and a Ph.D. from the University of California, Santa Barbara (June 15, 1974). Simultaneously, through a series of National Defense Foreign Language grants, he was able to become proficient in Arabic and Swahili and eventually was awarded a Fulbright Fellowship to cover a year abroad, some four months of it to be spent in Khartoum (Sudan). Later he participated in writing an academic history of the British in the Sudan, and contributed a review to the journal of the American Historical Association. More recently he published a specialized history of the Monterey Peninsula.